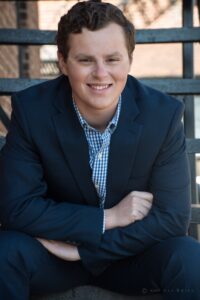 Before Noah Peterson began his first year at Michigan State University, the International Relations major knew he wanted to secure an internship in the Michigan legislature. To achieve this competitive goal, now in his second year at MSU, Peterson sent his resume to dozens of representatives’ offices. His efforts paid off; State Sen. Jim Runestad’s (R-White Lake) office extended him an offer to work as a constituent relations intern.

Peterson was excited to learn more about the inner workings of legislation, especially how individuals influence bills and lawmaking. Through his assigned responsibilities, he gained insight into that lawmaking process. Similar to many legislative interns, he provided general office support: filing paperwork, printing and organizing documents, and answering phones.

Further, Peterson collaborated closely with the constituents of the 44th District. He estimates he sent thousands of letters to residents, communicating with them about what was happening at the State Capitol. Peterson addressed constituents’ concerns daily, both by helping them directly and connecting them with different offices and individuals.

During his first position in the Capitol, Peterson says he learned many valuable lessons. “The importance of skills, especially electronic ones, like a proficiency in Word and Excel,” are important because they are integral to work being done in these offices. Through his extensive responsibilities and exposure to different issues, Peterson credits this position with helping his overall career development.

Peterson offered many pieces of helpful advice to his fellow Spartans. Most importantly, he states, “if you want something, especially in politics, go to networking events.” For example, Peterson secured a year-long position with U.S. Rep. Elissa Slotkin (D-Holly) by attending a networking event and connecting with members of her staff. Though, according to Noah, these events can seem intimidating at first. He learned not to be nervous. “They’re people, similar to you,” he said.

Although he cautions fellow students not to overwork themselves, he would recommend interested first- and second-year students look for internships. “Take time to explore what you want to do,” Peterson said. Though an underclassman may not be able to secure class credit for an opportunity, he believes the connections and career development are extremely valuable.

In his remaining time at MSU, Peterson hopes to build on his previous professional experiences. Specifically, this exposure has sparked his interest in further government and legislative work.