Spartan Showcase: Having a Mentor Can Influence Your Success 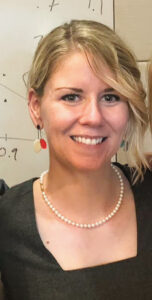 Spartan alumna Megan Marie Conlon looks back fondly at her time spent at Michigan State University, where her career journey began. Conlon graduated with her bachelor’s degree from MSU’s College of Natural Science in 2010. She then worked three years at the University of Michigan completing various research projects.  In 2018, she earned her Ph.D. in cellular and molecular biology from Stanford University.

As a first-generation student, Conlon was not quite sure what to expect from her undergraduate experience. She started out at MSU pursuing a career in nursing, but after meeting and working with Professor Patrick Dillon, Conlon realized she wanted to change her path. She was drawn by the passion this professor held for their work and decided to work in plant biology. Conlon spent a lot of her time in various labs across campus, gaining valuable hands-on experience.

Fast forward to earning her doctorate at Stanford University, Conlon was eager to work at her first full-time offer in San Francisco. She networked on LinkedIn to gain the position with the small startup. Conlon was able to meet many researchers from a broad range of sciences and studies.

However, once the COVID-19 pandemic struck, Conlon was laid off.  Another opportunity as a territory sales manager for BPS Bioscience fell into Conlon’s hands. In this new role, she provides academic, biotech and biopharma labs with a variety of scientific products and services that support a diverse range of molecular biology research categories. As a territory sales manager, Conlon covers much of northern California and its surrounding areas. BPS Bioscience is a relatively small company and Conlon enjoys the broad range of products and sciences that benefit from their services. She prides herself on the fact that she is able to help scientists meet their research goals by supplying them with the proper products that are important to the science.

In reflecting back at her time at MSU, Conlon really appreciates the way her coursework at Michigan State helped prepare her for her future and set her up for success. In-depth content covered in her coursework, along with how professors and researchers helped prepare her to understand content, as well as the importance of actually being able to work in a lab were all important, she said.

Another big contributor to Conlon’s success was a mentor she had crossed paths while in graduate school. The program had students rotate through different labs to assist in determining interests. A principal investigator (PI) on one of the research projects she was a part of sparked her interest, despite the field of study not being exactly what she thought she would enjoy. This PI eventually became a mentor to Conlon. The mentor was down to earth and straightforward with his methods. He was invested in his work and provided as much information as he could to his students. This mentor emphasized the history and theory of the science, as well as provided future applications for their work. This mentor served as a wonderful example to Conlon and really helped to shape her, teaching her effective problem-solving methods for the real world.

If Conlon were to go back in time to her undergraduate experience at MSU, she wishes that she would have recognized the importance of a mentor. She emphasizes that seeking out mentorships and help are extremely beneficial to all students, let alone first-generation ones like herself. Conlon says that people are usually excited to talk to and help students. She calls attention to the importance of providing yourself with as many resources as you can, especially in difficult times – you are often not as alone as you may think.

“Undergrad is a weird time… be conscious of imposter syndrome and have faith in yourself and your work,” she advises fellow Spartans. Things may seem overly stressful from time to time, but these difficult times help to promote character growth, Conlon said. Mentorship is extremely important, and she encourages students to find someone that helps bring things into perspective for them.

While she spent time at U of M and Stanford, Conlon said she bleeds green, and is a Spartan at heart!