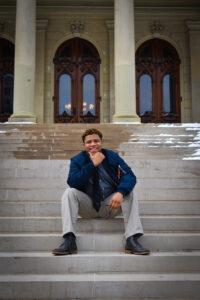 Michigan State University third-year student, Reese McCaskill Jr., dreams of a career in public service. Majoring in Political Theory and Constitutional Democracy and Social Relations and Policy at James Madison College (JMC), McCaskill Jr. hopes his coursework in policy will prepare him for law school. He now serves as an organizer for the progressive organization, Blue Future, to add to his knowledge of policy creation and legislative work.

McCaskill Jr. learned about this position through his peer network. As a member of a group message with many JMC students, a former organizer shared the position application with their peers. McCaskill Jr. was drawn in by Blue Future’s mission to push back against youth political apathy. He chose to apply for the role and was extended an offer and has now served for three months.

McCaskill Jr. has identified many benefits of working with a smaller, grassroots organization. Better able to talk and interact with his peers and supervisors, he has formed many relationships. He also cites the value in getting to know other people in the political space, learning how he can better help and advocate for those behind political statistics.

As a member of the Midwest Advocacy Coalition, McCaskill Jr. and his fellow organizers are tasked with identifying issues that pertain to the region’s youth populace and draft solutions. He also plays an integral role in spreading awareness of Blue Future’s missions and building the operating infrastructure of the coalition.

Some of the benefits of his position are the opportunities to attend training on intersectionality, LGBTQ+ information sessions and discussions with tips on how to run for public office, among others. Further, McCaskill Jr. can attend talks with local, state and national politicians to seek advice and learn about their journey in politics.

Through this role, McCaskill Jr. explained he has learned what it takes to be a young person in politics, such as determination and passion. He hopes to directly combat the assumption that youth must wait to be involved in shaping policy. “Young people have a stake in this country, too,” he said.

McCaskill Jr. plans to work to mobilize young people to vote and continue engaging in politics. Having served as the vice president of the freshman class council with the Associated Students of MSU (ASMSU), he credits the organization with allowing him to lead others and create projects, both of which were vital skills for his internship. As his first presidential-level position in an organization, it served as a step to help him network and build connections with his classmates.

McCaskill Jr. cites his involvement at JMC as another important component for his personal and professional development. Through his majors, he has learned about the origins and legacy of democracy, as well as its contemporary presence in the lives of people around the world. His MSU education has given him a better understanding of how he can better advocate for people in his future career.

To all Spartans, he recommends to be yourself when applying for positions and building connections. McCaskill Jr. advises that students don’t lose themselves in the competitive job process, but rather, logically select and apply for positions that are right for them and for which they have a passion.

Speaking to connections, it is vital that one “goes out there and takes the risk” to form relationships while in their undergraduate years. To McCaskill Jr., fearing failure will only stymie one’s ability to reach one’s full potential.