Career Services offices will be operating virtually from January 4 - 28, 2022. 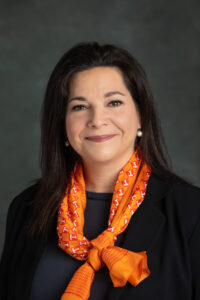 Michigan State University alumna Gretchen Neisler’s passion for animals led her to the university’s Animal Science program. To enrich her academic experience, Neisler joined the Zeta Tau Alpha sorority and participated in various Animal Science student organizations. Graduating in 1993 with a Bachelor of Science in Animal Science from the College of Agriculture and Natural Resources, she returned to MSU for her subsequent degrees, including a doctorate in Higher Education Administration from the College of Education.

Following her graduation in 1993, Neisler secured a position at Neogen. She learned of the role through her network in the Animal Science department and was glad she could stay in East Lansing. After working in the private sector, she decided to return to MSU to secure her teaching credentials and become a high school teacher. Following her short teaching career, Neisler was recruited by the Agricultural Technology program at MSU to teach and advise students before she shifted her focus to her current dedication, international education and outreach.

As part of her current work in international education and outreach, Neisler was project manager for an initiative calling for higher education reform in Egypt, traveling the country throughout the three-year project to institute their development plan. She served as a program director for a similar initiative in Pakistan, where she helped launch the program, open offices and hire staff.

As she finished her Ph.D. at MSU, she decided she wanted to do something different and accepted a position with Albion College working as a strategic planner. In this role, Neisler helped with budgeting and implemented a variety of student and faculty programs. After two years, Neisler was recruited back to MSU to work as the director for the Center for Global Connections. While there, she oversaw international research, traveled and became “immersed in the [agricultural] science they were doing around the world.”

Her director position at MSU prepared her for her current role, serving as the vice provost for International Affairs at the University of Tennessee-Knoxville. Her transition was spurred by a desire for new experiences and an interest in administrative work. Neisler strives to integrate her passion for international experiences with her love of administrative support. “If the door opens, you need to step through and see what’s on the other side,” she said, explaining her expansive career journey. She advises against complacency and hopes students and alumni alike remain open-minded about their career path.

Neisler recommends that all students cultivate relationships with their professors and “never underestimate the network [one] builds with [their] peers.” Neisler’s relationships with her peers and professors have been vital for her career opportunities. In addition, she credits the MSU brand and the prestige of the College of Education for grabbing prospective employers’ attention. The technical expertise the Animal Science program taught her also played a pivotal role in establishing Neisler as a competent, competitive professional.

Speaking further on building and nurturing connections, Neisler recommends that people “allow the human side of the relationship to be cultivated.” She believes that making time to create a human connection develops these relationships beyond the transactional. Further, she recommends students connect with handwritten thank-you notes, as they are especially impactful in the digital age.

In general, Neisler hopes students will make time to “have a transformational experience overseas.” She highlights the value study abroad experiences lend to one’s personal development, such as communication skills and independence. For all students, she suggests, “spend time figuring out how to tell your story.” In an increasingly competitive job market, learning to leverage one’s story and market that to prospective employers serves as a distinguishable advantage.